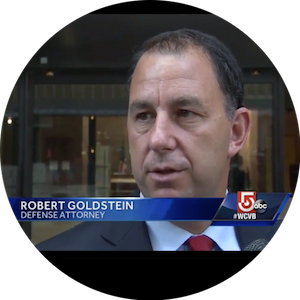 Based in Boston, Mr. Goldstein represents clients in federal and state courts across the country. Repeatedly selected by his peers for inclusion in The Best Lawyers in America and Super Lawyers, and asked by colleagues to serve on expert panels, Mr. Goldstein is routinely asked to join defense teams by some of the most renowned attorneys in the country. Why? Because they all know first-hand the skill set and dedication Mr. Goldstein brings to the defense of criminal investigations and prosecutions. Below are a few of the success stories from Mr. Goldstein’s practice:

Mr. Goldstein has served as an adjunct professor in the area of trial practice, and his trial expertise has been recognized by presiding Federal judges, co-counsel and even opposing counsel. After Mr. Goldstein’s first federal trial, just five years removed from law school, in a highly-publicized trial lasting several weeks (and eventually featured in magazines, a book and documentaries), the presiding judge on his own recommended Mr. Goldstein for inclusion on a court panel, writing that he "was astonished to learn he had graduated from law school only in 1995," and the judge "would have attributed another fifteen years experience to his resume." From that point forward, Mr. Goldstein has gone on to represent individuals and companies across the country in high-stakes litigation, in a career now spanning 20 plus years. In the process, Mr. Goldstein has developed a skill set that makes a real difference for his clients when it matters most.

There are no guarantees of success—the simple fact is that each case presents its own unique challenges. The one constant we provide is our dedication, knowledge, experience and skill. We firmly believe we provide our clients with the absolute best opportunity for success, and invite you to contact us to learn more.

Contact Us
Areas of Practice
Testimonials
★★★★★
"Rob guided me through the most difficult time in my life ... His preparation for the case and his execution in trial were truly the difference ... I truly trusted him with my life and he came through. Not a great promoter or guy who likes to hype, but he delivers where it counts. I am truly grateful that I selected his name over the vast number of attorneys in the Boston area. I rarely provide recommendations, but in Rob's case, I recommend that anyone facing serious criminal charges, where their freedom and livelihood is at stake, that they contact Rob." CEO / Entrepeneur charged with wire and securities fraud, April 2019
★★★★★
"Mr. Goldstein, I practice federal criminal defense in Oklahoma City. Last week I had the pleasure of watching you in action...I saw some of your cross examination on Thursday and your closing argument on Friday. You were absolutely phenomenal and I was very impressed with your trial skills. You are one hell of a trial lawyer!" Federal criminal defense attorney (in unsolicited email), February 2015
★★★★★
"I was astonished to learn he had graduated from law school only in 1995. I would have attributed another fifteen years experience to his resume." Federal Judge, October 2001
★★★★★
"Your argument was the only (defense argument) that made me uncomfortable. I kept hoping it would end." Federal Prosecutor to Attorney Goldstein after multi-defendant federal trial
★★★★★
"That was the best closing argument I have ever seen." Co-Counsel to Attorney Goldstein after federal trial
View More
Submit a Law Firm Client Review